EDIT: This was a while ago and by the end of the project I did get the FEA to work with Beam Analysis which was a better method.

I have been coming across the problem of trying to perform Finite Element Analysis on a chassis made primarily from Structural Member Weldments that are not long enough to use a ‘Beam Mesh’. 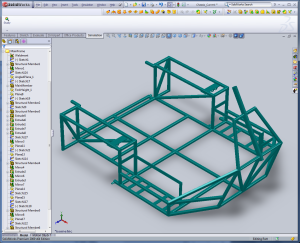 FEA can only be performed on a solid part so they need to be combined. The process that I am following is described below.

Export the part in IGES format:

Then import the exported part:

The imported part will consist of a large number of individual imported solids.

The imported solids are combined:

Select all members of the chassis by drawing a box around them and click apply.

If you are lucky the operation will complete but if you are like me it may say the familiar “Operation would cause zero thickness geometry”. I diagnosed which member was causing the error by adding the members one by one to the combine feature and running “Preview” and then went back and edited the original model to fix the problem.

You can then start a new study and select the Combined feature. Note that this is to use a tetrahedral mesh. If your chassis is made entirely of weldments you can utilise the ‘Beam Mesh’ option.

Being the “Creative Campus” Massey Wellington is, in 2nd year of my BE we had to design a moving mechanical sculpture. The machine I designed was heavily based on Theo Jansen‘s large wooden creatures which walk along beaches driven by the wind. Mine is a smaller scale, but still interestingly large as seen in the video. It has a steel frame and crank handle which is turned to make it walk. The rest of the body is made in a “kit set” fashion from plywood and PVC piping fastened with split pins.